For guitarists, sight-reading can sometimes be viewed as a particularly difficult skill to master. Here Richard Wright, co-author with Alan Bullard of ABRSM’s new Joining the Dots for Guitar, explores the reasons for this and explains how these books can help. Guitarists have always had an uneasy relationship with sight-reading. In fact, it is just one of a number of aspects of guitar playing that can cause us, wrongly, to imagine that ours is a more difficult instrument to play than others. Some of the guitar’s inherent characteristics do make sight-reading difficult, but if we understand what they are, it is easier to address them. The guitar itself is something of a hybrid: a string instrument with all the expressive potential which that entails – vibrato, portamento etc – yet one that, like the piano, is polyphonic and self-accompanying. This unique and beguiling set of characteristics lies at the heart of the matter. A fundamental aspect of all string instruments is that the same note can be played in more than one place on the fingerboard. The guitar is no different, but as it has six strings not four and they are tuned in fourths not fifths, the problem is compounded: there are more instances of note duplication and, as you move up the fingerboard, you arrive at them sooner. If we add to this the self-accompanying, piano-like element, the question of vertical, and not just horizontal, reading comes into play. As early as Grade 1 repertoire, simple two-part writing can be found, while at Grade 5, three- and four-note chords are not uncommon. Surely though, the pianist has many more notes to digest at any one time – and they are spread out over two staves and usually presented in two clefs? Yes, but each note has only one location on the keyboard. 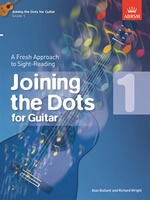 There is a cultural issue too: guitarists invariably try to do too much, too soon. In terms of professional pedagogy the guitar is a young instrument with a history of, very often, self-taught players with poor reading skills playing pieces that were too difficult for them. The result? Rote learning and an undermining of the link between eyes, ears and hands: the player does not understand what he or she is about to play and is unable to recognise and assimilate basic rhythmic and intervallic information. A parallel history of over-fingered editions has not helped. If every note has a fingering attached, the player who is not a good reader will follow the numbers not the notes, and thus never become a good reader. The answer to the multiple note location question is to learn to think, jointly, in terms of key and position; the answer to the ‘too much too soon’ syndrome is, obviously, to take things a step at a time. Joining the Dots for Guitar addresses both points. The material in the five books follows closely the sight-reading parameters for Grades 1 to 5. The first two books are therefore all in the first position, where there is no note duplication. By the time you get to the third book, which adds the use of the second position for D major and to access the upper tonic in A minor, you are familiar with a range of basic notes and note values and are able to recognise simple key scenarios. The fourth book extends the use of second position and the final book goes up to fifth position. Throughout the series, new keys are added but the original ones remain, for maximum reinforcement. Finally, a word about Alan Bullard’s ingenious format, tried and tested in his original piano Joining the Dots, and repeated here. Each book has a section for each key. These contain four different but complementary sets of activities: Key Features (an introduction to the key), Workouts (technical exercises), Make Music (creative work) and Read and Play (actual sight-reading pieces). At the end there’s an extra section called More Pieces to Play, which uses the full range of keys found in that book and includes some duets and trios. It could be argued that a musician is only as good as his or her weakest attribute. Sight-reading should not, therefore, be seen as an end in itself or more important than any of the other interdependent skills needed to become a complete musician. It is more a case of ensuring that a pupil’s development is not compromised by a lack of musical literacy. The printed score is an information storage system and the function of the eye is to retrieve that information – and those who can read music fluently are able to learn more music, more quickly than those who cannot.

Richard Wright teaches guitar at the Yehudi Menuhin School and the Royal College of Music. He was a consultant for ABRSM’s Guitar syllabus and for Music Medals.

This article was originally featured in the January 2012 edition of Libretto, ABRSM's magazine.