A history in four hands

In the third of his series of articles on piano duets Nigel Scaife, ABRSM’s Syllabus Director, explores the history of the form and how the repertoire has evolved. The piano duet repertoire is rich and diverse, offering high quality music for players at all levels. Exploring new repertoire is one of the great joys of duet playing, and I hope that as a result of reading this short article you will be inspired to make some new discoveries!

The limited compass of early keyboards meant it was difficult to have two players placed in front of them, especially given the voluminous clothing of the 16th century. Nevertheless, the English virginalist composers Thomas Tompkins and Nicholas Carlton were among the first to write keyboard duets – Tompkins’s A fancy is probably the earliest keyboard duet to show a real appreciation of the medium. 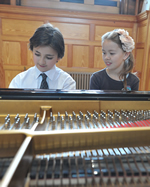 The next appearance of published duets was not for another 100 years, with Jamelli's Sonata, Haydn’s The teacher and the pupil and Mozart’s little C major Sonata, K. 19d. This last piece was probably written for the very first keyboard duet recital. This took place in 1765 when the nine-year old Mozart and his sister Nannerl played together in London on a two-manual harpsichord. With the publication of Charles Burney’s Four sonatas or duets for two performers of 1777, the medium was finally put on the map. As the compass and sonority of keyboard instruments increased during the 18th century, duet playing was made more feasible and attractive. With the growth of music publishing and the rise of a middle class, an environment was established that would make composing and publishing duets increasingly profitable. Many teacher-pupil duets were soon being published, including those of J. C. Bach and Clementi. But one of the greatest writers of piano duets was to outshine them all – Mozart.

Mozart used duets in his teaching and performances throughout his life and wrote many pieces for the medium including four sonatas, of which the Sonata in F, K. 497, is widely considered a Classical masterpiece. After Mozart’s well-publicised performances, the popularity of duet playing began to grow. Fashion also played its part, as the move away from wigs, rigid corsets and hooped skirts to simpler attire made duet playing easier. Schubert was the second great Classical composer of duets and the most prolific. He wrote over 70 duets throughout his life including the challenging Grand Duo in C, D. 812, Lebenstürme, D. 947, and Fantasie in F minor, D. 940. He also wrote many easier but rewarding pieces that provide excellent teaching material – his numerous Marches, Waltzes and Polonaises, largely written during visits to Count Esterhazy’s summer home, in 1818 and 1824, where he taught the count’s two daughters.

As the piano evolved to become the pre-eminent instrument of the 19th century, duet playing became the favourite social and musical pastime in every affluent living room. It also provided an ideal opportunity for young people to meet, at a time when such opportunities were more limited and social conventions entirely different from our own. The political and economic situation at the start of the 19th century indirectly contributed to the growth of the piano duet. High taxes levied by Napoleon led wealthy families to abandon the hiring of chamber orchestras and to substitute the piano duet as an alternative form of entertainment. As soon as a new opera, symphony or chamber work was premiered, the publishers would issue a duet version of it for an insatiable market. Weber’s three sets of duets are mainly instructional but contain fine music, as do the duets of Mendelssohn and Schumann. Liszt was an enthusiastic duettist and often wrote his pieces, such as the Mephisto Waltz, in various versions: for piano solo, duet, and orchestra. Even Chopin composed a set of youthful variations – known today as the Carnival of Venice. Brahms’s duet music, however, is more substantial and significant. His Waltzes, Op. 39, and Hungarian Dances, WoO1, are well known in every sort of arrangement, but were originally conceived for piano duet. The Liebeslieder, Op. 52, and Neue Liebeslieder, Op. 65, while originally being for voices with duet accompaniment, were also published in a version without voices.

Less well known are the duets of Bizet, the first of a long line of French duet composers including Fauré (his Dolly Suite, Op. 56, being a perennial favourite), Debussy, Satie, Ravel, Poulenc, Koechlin and Milhaud. Bizet’s Jeux d’enfants, Op. 22, is a set of 12 pieces that describe children’s games and is well worth exploring, although technically challenging. Pieces about childhood (rather than for children) have a special place in the history of French piano music and include Ravel’s Ma mere l’oye, which originated as a piano duet. Ravel’s Rapsodie espagnole also began life as a duet and in 1910 he transcribed Debussy’s Prélude à l’après-midi d’un faune for piano duet.

In the early 20th century the popularity of the piano duet began to wane, the result of social, economic and musical factors, including the introduction of recorded music and the rise of Modernism. Stravinsky wrote a fiendishly difficult duet version of his Rite of Spring, but also two sets of duets for beginners – the 3 Easy Pieces and 5 Easy Pieces. There are also duets by other well-known 20th-century composers, such as Hindemith, Percy Grainger (including Country Gardens) and George Crumb, as well as less familiar ones such as Ernst Toch, Arnold Van Wyk and Casella. There is also an English tradition of duet writing. Walton’s two volumes of Duets for Children are easy enough for talented students around Grade 5 and there are many examples of fine duets by composers such as Warlock (including the Capriol Suite), Lambert, Rawsthorne and lesser-known figures, such as Lord Berners, Percy Young and York Bowen. More recently, Thea Musgrave, Richard Rodney Bennett, Edward Gregson and Kenneth Leighton have all written for piano duet.

We now have many specifically educational duet books to choose from including Christopher Norton's Microjazz, Martha Mier's Jazz, Rags & Blues, Pauline Hall's Duets with a Difference, Mike Cornick's Clever Cat, and Pam Wedgwood's After Hours. Some contain teacher-student duets alongside student-student ones and all provide resources to support students with stimulating and challenging repertoire that will motivate and instil a love of making music with others.

Playing duets has significant value in developing musicianship skills for pianists, so why not introduce more duets to your students, put a few duets into your students’ concerts, prepare them for a duet exam, or explore the repertoire yourself with another teacher? After all, playing duets has to be one of the most enjoyable and rewarding ways to make music!

This article was originally featured in the September 2012 edition of Libretto, ABRSM's magazine.